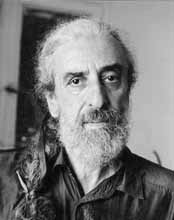 Lezer Manole was born in odessa in 1945.
Graduated from the Odessa Academy of Arts. Exhibited in Russia, Finland and Italy.
Manole immigrated to Israel in 1990, lives and works in the Ein Hod Artists Village.

His work today depicts his memories of the Jewish community with humor and love. In this manner he deals also with the lives of immigrants in Israel and world wide, trying to make a home for themselves in a new land.
Some of his work portrays longing for the bible stories.

Manole has become a member of Ein Hod artists village during 1990 and has been living and creating in the village ever since.
Recently Manole opened the Manole Art Gallery, wich exhibits artists from the village.

Manole has mastered several special techniques: Vitrage and Glasswork as well as paintings – Oil on Canvas, Watercolors on Paper.

Biography Summery:
1945 Born in Odessa USSR
1964-69 Studied at the art academy in Odessa
1970-73 Lived and worked as a monumental artist in Baccu.
1973-90 Worked as a Vitragist in Odessa.
1990-today Living and working in the Ein-Hod artists village in Israel